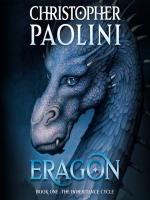 Note! Citation formats are based on standards as of July 2010. Citations contain only title, author, edition, publisher, and year published. Citations should be used as a guideline and should be double checked for accuracy.
Description
Don't miss the latest book from the author of Eragon, The Fork, the Witch, and the Worm: Tales from Alagaësia! Perfect for fans of Lord of the Rings, the New York Times bestselling Inheritance Cycle about the dragon rider Eragon has sold over 35 million copies and is an international fantasy sensation.Fifteen-year-old Eragon believes that he is merely a poor farm boy—until his destiny as a Dragon Rider is revealed. Gifted with only an ancient sword, a loyal dragon, and sage advice from an old storyteller, Eragon is soon swept into a dangerous tapestry of magic, glory, and power. Now his choices could save—or destroy—the Empire."An authentic work of great talent."—The New York Times Book Review"Christopher Paolini make[s] literary magic with his precocious debut."—People "Unusual, powerful, fresh, and fluid."—Booklist, Starred"An auspicious beginning to both career and series." —Publishers WeeklyA New York Times BestsellerA USA Today BestsellerA Wall Street Journal BestsellerA Book Sense Bestseller
Table of Contents
Loading Table Of Contents...
Also in This Series

There are 7 holds on this title.